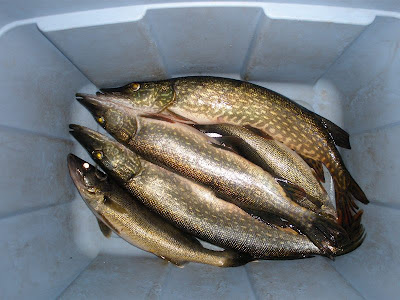 This tub of fish in our fish cleaning hut last summer caught my eye as just about the perfect size walleye and northern pike to keep.
The walleye are about 17 inches in length and the pike are about 26 inches. Incidentally, a 17-inch walleye will easily feed one person and a 26-inch pike will feed at least two.
Ontario fishing regulations for Zone Four, which includes Red Lake, allow anglers to only have one walleye over 18 inches in their daily or possession limit. They cannot have any pike 27.6-35.4 inches and can only have one pike larger than 35.4 inches.

If you want to ensure there are fish for the future, you should release ALL walleye over 18 inches and northern pike over 27 inches.

Angler A's decision to keep a big fish meant there were 1,037,270 fewer potential fish in the lake over the next decade! More than a million!

Not all eggs survive, of course, and the fertility of old fish drops a little bit in their last years, but you get the picture. Keeping big fish is just about the worst thing you can do for conservation and the future of fishing.
Incidentally, northern pike aren't nearly as prolific as walleye. They produce 9,000 eggs per pound. 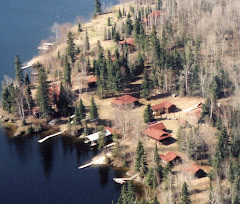 Dan Baughman
Red Lake and Nolalu, Ontario, Canada
My wife, Brenda, and I retired as owners of Bow Narrows Camp in 2017 but still live in Northwestern Ontario, at our home in Nolalu in the winter and soon at our cabin on Red Lake near the camp. I grew up at this remote fishing/hunting wilderness lodge which was first created in 1948. My mom and dad, Del and Don, bought the camp in 1961. My family then operated the camp until 2017.